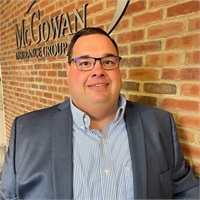 Chad entered the industry in the summer of 2019 and has since earned his Indiana license in both Life & Health and Property & Casualty.  Prior to being at the agency, Chad owned and operated a successful manufacturers' representative company specializing in the cable tv industry, which he sold in the fall of 2018.

In addition to his position with McGowan, Chad is a current elected official serving as a member of the Henry County Council.   Chad and his wife of almost 20 years, along with their daughter Emma, reside in East Central Indiana and where they are involved in several local community organization and youth sports.