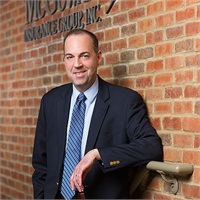 After beginning his insurance career in Chicago, Hugh moved back to Indianapolis to take a position at McGowan in 1995. He was promoted to Sr. Vice President in 1998 and finished his Chartered Property & Casualty Underwriting (CPCU) designation. He was named President of the agency in 2010 working alongside his father and Chairman, Hugh McGowan Sr.

Following the purchase of several accomplished agencies, Hugh moved into a new role as Managing Partner of the McGowan Insurance Group. He and the partners are responsible for the direction of the agency as well as maintaining the McGowan culture that has become synonymous with service and trust after 90 years.

Hugh remains committed to the local community being actively involved in various organizations such as the Junto of Indianapolis and the Penrod Society.  Hugh graduated from the University of Notre Dame in 1993. He is married (Kate) and has two children (Jack, 18, and Maggie, 14).